WHAT TO KNOW BEFORE BUYING A WEED BURNER 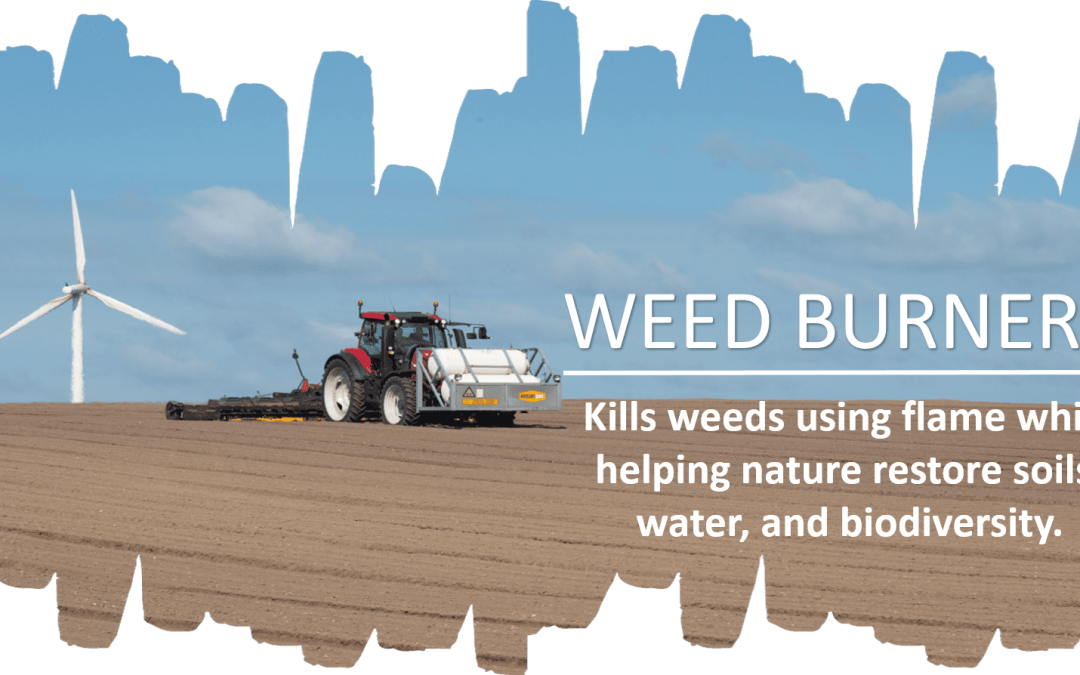 Thermal weed control is the working technique of controlling and eliminating weeds, fungus diseases, and insect pests by using heat.

This type of weed control is the oldest type of weed control since the first farmers in ancient Egypt already used this type of control for their crops. Remains have even been found from the Neolithic era when fire was already being used. Going back to the modern era, we found it in the USA around 1850. John A. Craig first patented a flame-weeding machine for sugarcane fields.

Thermal weeding plays a major role as a biological control in agriculture. The main advantage of flame weeding is the absolute absence of harmful residues in the soil, in fact, LPG, when burning, forms only water vapor and CO₂. The principle on which the flame weeding technique is based is that of boiling the weed tissue. The time of action of the heat during the treatment is so short that does not allow carbonization of the plant material. The immediate effect of the heat is to cause the cell plasma to expand sharply, thus causing the outer membrane to rupture; the intracellular flow of nutrition is thus interrupted: the cell can no longer nourish itself and, because of the continuous evaporation caused by the tearing of the cuticle, within two or three days, the plant dries up and dies. Therefore, flame weeding does not burn the weeds, but immediately after the heat treatment the treated plants show a change in pigmentation; the green color of the leaves is strongly accentuated. This manifestation is visible within a couple of minutes and is due to the release of sap from the cell.

The exposure to high heat leads to overheating and eventual rupture of the plant tissue. It’s important to note that the weeds don’t need to be burnt to a crisp to be killed, this will only ensure that you waste time and fuel in the process. If you squeeze the plant and notice your thumbprint indent onto the plant, you know your flame weeding has been successful.

From an ecological point of view, flame weeding has a minimal environmental impact. Since the combustion of LPG only forms water vapor and CO₂. The heating of the surface layers of the ground, brought about by the rapid passage of the burners, brings the surface itself to a temperature that often does not exceed 60-80 °C, a temperature that we can easily experience even in the hottest hour of the summer season. Damage to soil microflora and microorganisms is therefore minor, there is no risk to operators and no toxic residues are released into the environment. Another result that can be achieved, from an environmental hygiene point of view, by reducing the speed which allows the surfaces , pavement, or concrete floors to  slightly higher temperatures (80-100 °C) which removes pathogenic germs and allows an effective sterilization operation. At the same time it dries roads quickly, so that can be paved faster.

With the application of this technology, the costs involved can be determined immediately, since this weed control technique does not give rise to any environmental pollution, other than CO₂ , and any additional costs incurred after the treatment carried out and due to the disposal of any toxic residues are therefore equal to zero.

a. Realize the burner for preparing the seedbed ( a week before)

b. Accelerate weed growth, irrigate and wait for all weeds to sprout

c. Plant a crop you know has an earlier germination day

d. Create a greenhouse effect with a small pane of glass over a small section of the seeded crop, germination will appear earlier, indicating that it is time to flame.

WHAT TO KNOW BEFORE BUYING A WEED BURNER

There are many organic and environmentally friendly weed control solutions on the market, and they are not all the same, so choosing between them can be overwhelming. In this article, we’ve compiled the 4 most important questions you should ask yourself to narrow down the market.

By asking yourself a few easier questions, you can get closer to finding the solution that suits your cultivation system and needs.

1. WHAT DO WE NEED THE WEED BURNER FOR? It is important that we understand clearly what we are going to burn. Depending on the type of crops or service we have to choose between a flat burner or an in-row burner, for crops already grown. Each crop needs a specific burner. The weed burner will be adapted to the farmer’s cultivation system.

2. HOW EXPENSIVE IS IT TO USE A WEED BURNER? We need to find ways to reduce the cost of consumption. A weed burner uses LPG and its only polluting residue is CO₂. Finding a weed burner where the reduction of gas helps to reduce CO₂ is of high importance. Both for the farmer’s economy (ROI), and for the environment.

3. WORKING AT ANY TIME AND IN ANY SITUATION Not all weed control systems are able to work when the wind is blowing , meaning you lose days of work before germination. Find a burner that protects the flame from the wind and increases its power inside the burner.

4. REDUCE AND SECURE. A weed burner must be safe for everyone who has to work with it, for the crops and for the environment. Therefore, it is important to buy a weed burner where a lot of knowledge and experience can be obtained from the manufacturer. A weed burner, where at the same time we reduce consumption and pollution. Tested and verified.