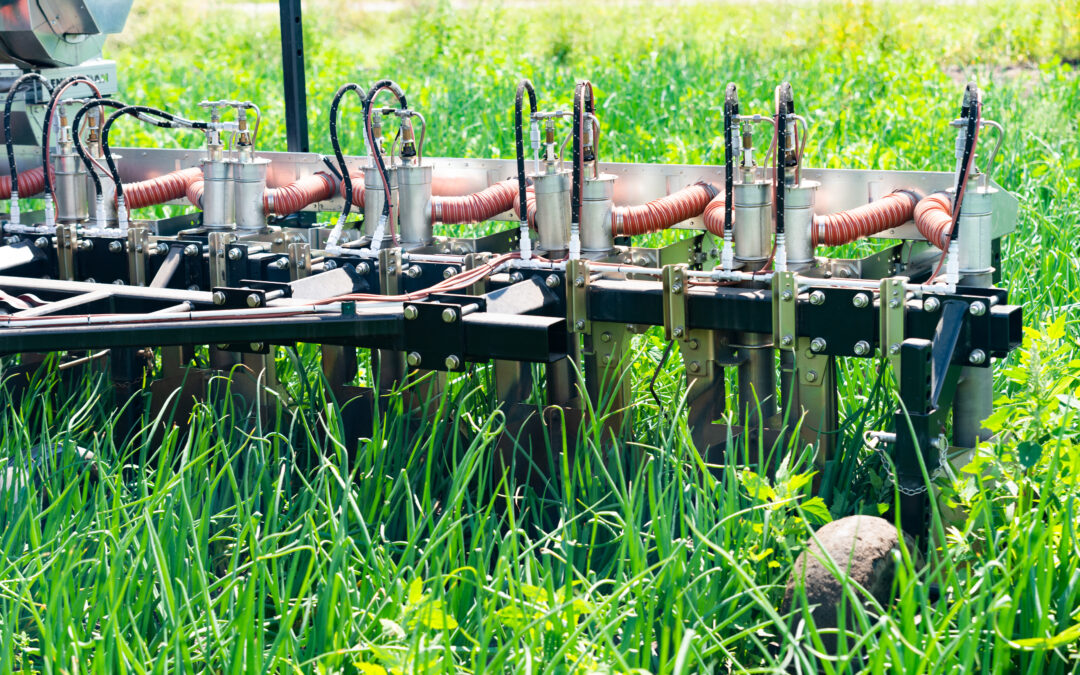 Onions unlike some other crops, develop very little leaf material. In crops where a canopy is formed, leaf material is very useful in suppressing weeds. Potatoes are an example where you don’t have to do anything; the leaves of the potato plants suppress the weeds. In onions, you have to manage the weeds up until the harvest. In the last two months, the most effective way to manage the weeds is to burn under the leaves. The only alternative form of weed management would be to weed by hand. Manual weed control is usually one of the biggest costs on an organic farm. The opportunity to reduce costs and manage the weeds challenges is being developed by ENVO-DAN, burning will be an effective and cheaper solution. ENVO-DAN burners.

It is important that the flame hits the neck and not the top of the stems. The flame is very concentrated when it hits the neck of the onions. The weeds we burn are dying immediately. One way to test is that if the fingerprint on the leaf remains dark, then the cells are destroyed and the weeds have begun to wither.

We can divide the onion cycle into four stages, each of which needs a special process control. Our customers and experts have explained to us how they manage the processes in each stage. Depending on the soil cultivation, they can also suffer from annual or perennial weeds. And we give you an overview of these.

Stage 1 Seedbed preparation According to our experts, the best option in this phase is flat burning after soil preparation. What is a flat burning? and how does it work?

ENVO-DAN’s patented E-Therm system reduces gas consumption by up to 40 percent. This happens by ensuring an optimized gas/air mixture during combustion and by ensuring combustion against the surrounding wind. In this way, the heat of combustion is used to the maximum for weed control, which provides high efficiency. The E-THERMS are equipped with an air supply, which creates an overpressure under the shield, this makes it able to operate at wind speeds of up to 12 m. per second, and has no effect on the weed burning process. E-Therm is the most efficient weed burner on the market, with a study and documentation of gas consumption savings of 40 percent. The study and documentation have been carried out by the Faculty of Agricultural Sciences in Flakkebjerg (University of Aarhus). E-Therm is available in all widths from 1.5 to 9.2 meters. Depending on the cultivation system. All ENVO-DAN agricultural models are built in cooperation with the customer and according to his needs, so we make sure that the burner is exactly adapted to his cultivation system. Seedbed preparation before sowing aims to create a favorable soil structure. We can understand this preparation as the work that must be carried out on the soil to improve the soil’s own characteristics, in order to facilitate the optimal sprouting and growth of the crops. After this preparation, weeds will also sprout and at this point, the ENVO-DAN E-THERM flat weed burners are effective in killing such weeds.

Stage 2 First shoots and tender roots. At this stage, experts recommend manual and mechanical weeding. For two main reasons: at the beginning of the stage, the shoots are too tender and would not resist burning, as the leaves have not yet developed the wax layer that protects them and can better resist fire.  On the other hand, the roots are too small, and mechanical weeding would not damage them.

Stage 3 Developed onions.  At this stage, the onions have developed well, the leaves have already formed a waxy layer on the neck and the roots are large, using mechanical weeding here can damage the roots, causing damage to the onions and allowing soil diseases to enter.  At this stage, ENVO-DAN’s “in-row” weed burners are recommended by experts. The patented ENVO-DAN E-Therm Selekt system also generates heat from the sides. In this way, the burner burns between the crop rows, which means that young weeds are well controlled.  With these burners it is possible to burn during the stages where the crops are developed, avoiding mechanical weeding damage to the crop roots, as such damage often results in delayed crop growth and, in many crops, root damage is an open door for soil-borne diseases. The E-THERM SELEKT is designed in such a way that effective burning is possible in well-developed crops because in front of the burner hoods, drag guides are mounted, which collect the leaves and keep them upright as far as possible. This ensures that the heat can enter the row, where the germinating weeds have to be controlled.

Stage 4: Drying and harvesting. In this last stage, we return to the ENVO-DAN flat weed burners, as they are very useful for burning and drying onions, preventing diseases and fungus. At ENVO-DAN we are always working to improve. We are ready to continue teaching and sharing experiences. What can we do for you? What can we help you with? Tell us about your challenges.

(In cooperation with Martin Becker)