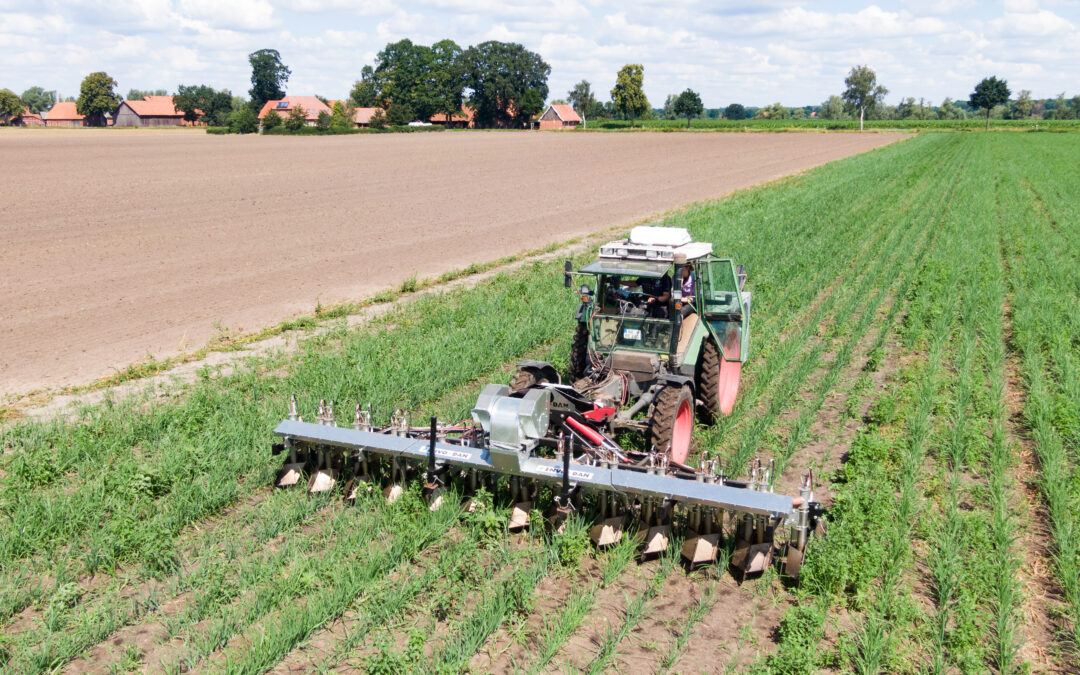 Danish weed burner ENVO-DAN builds burners, that are used especially in organic cultivation. In recent years, a new concept has emerged from customer demand: the “in row” burning of crops during cultivation, with a weed burner constructed as an in-row burner. The working principle differs from traditional weed burners. The in-row burner also emits heat through the sides. In this way, the burning takes place in the rows of crops, which means, that burning in the crop rows provides thermal control of young weeds. There have been experiences with “in-flat” burner of crops such as maize, pumpkin, and onions for some time, but with traditional burners, which have a different working principle. This summer, an ENVO-DAN in-row burner was tested on a vegetable farm in Lower Saxony (Germany) in the cultivation of onions.

The light sandy soil on the farm is so rich in weeds that various weed species germinate all year round; that late weeding of the sprouting weeds is particularly troublesome. The idea is that by burning in-row, no new weeds are awakened and there is no danger of root damage as is the case with the hoe. Roots damage often results in stunted growth of the crop. Moreover, in many crops root damage is an entry point for soil-borne diseases.

The machine is constructed in such a way that it is possible to work on crops that are already developed. Drag-guides are mounted in front of the burner hoods that collect the leaves and keep them upright as much

as possible. This is to ensure that the heat can get into the row, where the germinating weeds need to be controlled. The hoods around the flame leave an opening at the bottom to give the heat a way out, this is blown into the row with air support. In addition, the fan provides more oxygen to the combustion process, which results in higher heat generation, saving gas and reducing CO₂.

The machine was tested for the first time in onions, which were already so developed that some of the leaves were already touching the ground. The question was whether there would be no unacceptable fire damage with the burning. With a speed of about 3.5 km per hour, the effect on the weeds seemed to be good, especially the younger ones were well controlled, the older weeds were not sufficiently affected by the heat. It was exciting to see the effect on the onion leaves. The hot spots reached the wax layer in particular and sometimes some leaves were torn. Early in the morning, the leaves were steeper and the result was better. The stage of the crops and the time of day, therefore, appear to be very important for an optimum result. Another question was whether the onion bulbs that were already slightly above the ground would suffer any “sunburn” damage from the burning. No damage was detected during a check immediately after burning, neither in a check one month later. These first experiences with the new machine are very interesting, especially for Galinsoga shoots, which are reasonably well controlled during cultivation, as long as control burns are done. Especially on sandy soils, this would be a very welcome technique for organic vegetable farmers to control these challenging weeds. The question is also whether the principle of in-row burning can be applied to more crops, especially where late weeding is a problem. Examples are celeriac, various types of cabbage, beans, or fennel. With an adjusted working width of the burner hoods, it would also be possible to work in more crops than the current row width of 50 cm. It remains to be seen how this technique will further develop. Certainly, there seem to be enough good prospects for further experimentation in the next cultivation season.